Tanya’s Take On: Nathan Sykes As My First (Celebrity Guest)

For those of you who don’t know, I do a radio show at Seacrest Studios at the Children’s Hospital of Orange County (known as CHOC here in LA). About twice a month, one of my best friends Raquelle (shoutout to my girl because she is amazing!) and I drive an hour and a half down to CHOC and volunteer our time. While there, we have met some patients that have become family to us. Although when we started volunteering, we intended for our visits to bring a little laughter and some fun to get the kids’ minds off the day-to-day in the hospital…what we didn’t expect was how much the kids would change our lives from the inside out.

I bring all this up because the fact that I had my very first celebrity guest on this show meant a lot to not only me, but the patients at CHOC as well. 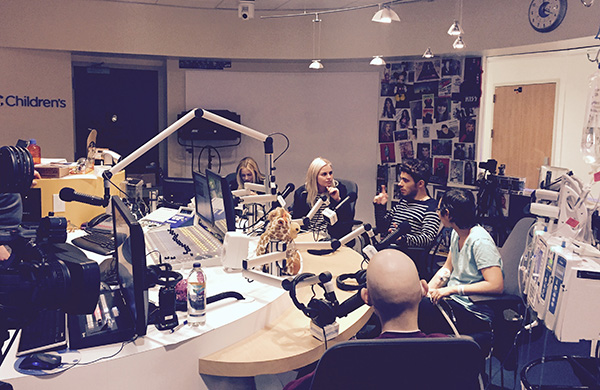 The fact that Nathan Sykes reached out because he was seeing what was happening at CHOC and wanted to be a part of it truly shows what kind of person he is.

Nathan shared a lot about the status of his new music (coming this Fall — woohoo!) and talked about his love for music! We played some Charlie Puth because we’re both big fans, then played Nathan’s new single “Over and Over Again” ft. Ariana Grande. He talked about how much this song means to him, and how much it has apparently meant to other people — he’s heard from lots of people who are making it their wedding song.

Nathan Sykes was my first (on-air celebrity guest)…but he definitely won’t be my last!

I also want to take a little time to give a shout out to my boss Ryan. Hosting the show meant I had to leave work a little early to make it down in time for this interview. I always put my job before anything personal but this was something special…even still, I was nervous to ask for his permission. However, not only did he applaud me — he also wanted to talk to Nathan about his experience down at CHOC!

To me, that’s a true testament to Ryan’s character...and solidified the fact that I’m working for the right person: a person that values the same things I do, and always encourages me to move forward.

The day Nathan hosted with us was great for many reasons, but by far the best had to be finding out that one of the very first patients I met at CHOC, Claire, will be finishing up her last round of chemo and — fingers crossed — will be leaving the hospital by the end of March! I was thrilled to hear this and can’t wait to hear more success stories from people winning their fights — and I can’t wait to bring those stories to all of you!

Oh, and another big shout out to Claire, Frances, and Diego for being a part of our show with Nathan!

Editor’s note: if you would like to donate to CHOC, visit this link and write in “Radio Studio” in the section marked “Other Designation.” Orange County residents can also read more about how to become a CHOC volunteer like Tanya. You can also check out Ryan Seacrest's Foundation here.