The iHeartRadio Theater is one of NYC’s best-kept secrets. It’s an intimate venue—and I mean intimate. The theater maxes out at approximately 200 guests and the only way to get in is to win a ticket by listening to the radio. If you are lucky enough to be standing in the front row, you can literally touch the performing artist. You can see them and they can see you. It can’t get any better. And the same goes for the experiences gained by actually producing the events.

As the video director, I am responsible for leading a six-camera live shoot as well as the overall design and atmosphere in the room. We customize the lighting for every show with each artist so that not one show looks or feels the same. Budget restrictions, scheduling conflicts and creative disagreements all get sorted out with the band a week prior to the show and on the day of, there can be no stopping. A hiccup in the whirlwind of logistics has a domino effect on the rest of the day, but before we know it, it’s always time for the show to begin. 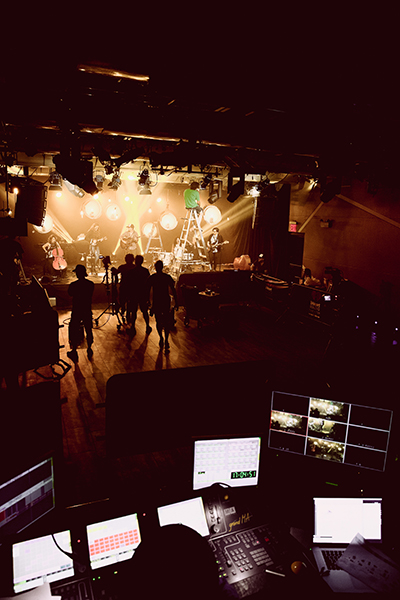 Doors open and eager fans fill the room. The producer counts down while I double-check each camera in my monitors backstage. I can see the entire room from all different angles. The countdown begins: “20,” she exclaims! Cameras are all in position. “15!” I cue the house lights to go dark. “10!” The crowd begins to cheer. “5!” I’m ready to begin a live edit of the show we’ve spent all day preparing and all cameras are speeding. “1!” The artist heads onto stage. The tiny audience erupts in cheering and for a brief moment I get the chills that every director finds so rewarding.

But just before the artist starts playing, something inevitably happens: almost every person launches their phone in the air. These tiny fluorescent screens are all raised high to capture the moment and as a result, there’s minimal dancing, minimal singing—just recording. 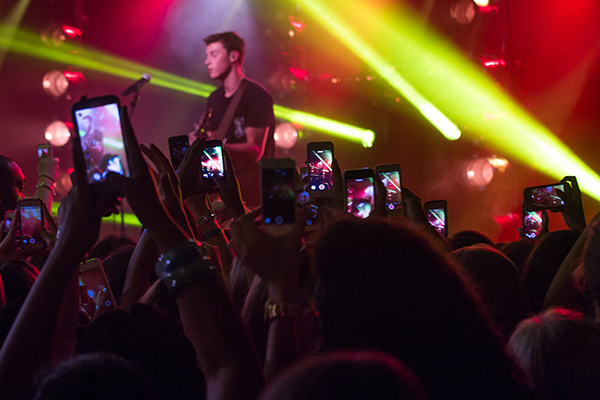 I get it: people want to be able to say “I was there,” and we all know that life has become a nonstop flow of Instagrams and Snapchats. I get it. Some artists will even play along with the crowd, incorporating phone addiction into their performance, like when Lady Antebellum snatched the phone one audience member was FaceTiming their friend with, brought it onstage and turned it towards the audience so the friend could have a glimpse of her point of view.

That’s a cool moment, but what about the rest of the concert? Can you fully appreciate how intimate that setting is through a tiny digitized reenactment of the show? I say no, and I’m recording it. Yet with every show that comes through, no matter how high the caliber of artist, people insist on watching through their cell phones. I’ve seen Jason Derulo jump off of stage and hold a girls hand while he sang to her and she still tried to record the moment instead of just living it. 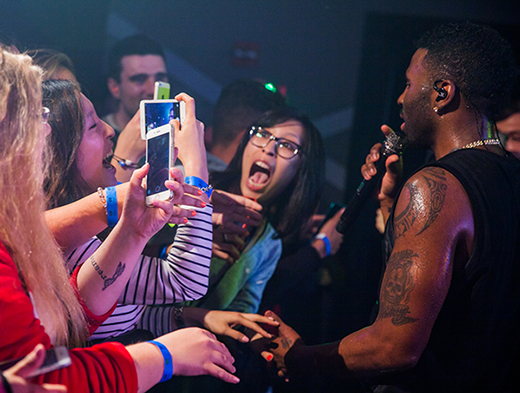 Fighting against cellphone addiction seemed to be a losing battle, so eventually I just gave up caring about how the audience experienced the shows, as long as they enjoyed them, until one artist (and only one artist to this day) decided that they wouldn’t stand for it. That artist was Muse.

When I heard that Muse would be playing in our theater, my heart sank to my stomach. I’m a huge fan and Muse hadn’t played a venue this small in about 20 years. They were debuting music they had never played or released publicly and therefore did not allow any phones or recording devices during the performance. I was so happy about this. Finally, an audience that would actually appreciate the full ambiance and show experience. There was one catch though: that policy also included the iHeartRadio staff.

If you happen to work in production, you know how necessary it is to have your phone on you at all times. Anything could go wrong at any moment, and we don’t have time to waste. But that didn’t matter to Muse. Their rule was: No phones, period. And honestly, for the chance to work with Muse, that stipulation was totally worth it.

On the day of the show, I found myself completely absorbed in our work. I’ve never spent so much time working with an artist. I practically memorized every song on their set list, several of which only existed on Matthew (the lead singer)’s iPod. The amount of lights on stage and the rigging required was extensive yet we finished relatively early, allowing extra time to program the lights. The calmness and concentration through the room gave me a good feeling about this show. What was arguably the biggest show in the theater was about to go off without a hitch, a rare occurrence in this usually cluttered and hectic environment. We put on our finishing touches to the stage while the production staff checked the audience’s phones upon entry to the theater.

As usual, the producer was counting down to the start of the show and I was exceptionally eager for the show to begin. The band emerged from backstage and the audience erupted like I’ve never seen before. The smiles on the band member’s faces as they saw the crowd put a smile on my own. You can tell that they really hadn’t ever played a venue this small, and they seemed really excited about it. And then, just after they began to play, something happened: jumping! Lots of jumping from every audience member. The hydraulic floor bounced up and down so much so that my cameras couldn’t hold a steady shot—and I’m not sure that I cared.

The most fun show I've ever directed for @iheartradio: @muse

This audience really was experiencing the show the way it was meant to be experienced, and I figured if that sacrificed the quality of the stream, then so be it. Somehow, it didn’t though. The kinetic energy of the room heightened the vibe and Muse fed off of that energy, resulting in an excellent performance. The live edit benefitted from the time taken to commit the music to memory. The lighting looked beautiful, and I found myself, even while directing, thoroughly immersed in the moment.

You could conclude that the success of this particular show was due to the music genius that is Muse, but I would disagree. Everything came together during this show because Muse insisted that every audience member and crew member put down the phones and live in the moment. Muse works hard on their music and their performance, just like we work hard to produce these shows, and they deserve respect from every audience member. Simply ignoring all the irrelevant emails, texts, Snaps and Instas wasn’t a lot to ask, and it drove us to produce even better work. I realized that just because I’m directing these shows doesn’t mean I’m any different from the people watching them. I, too, should experience these shows through the best lens possible: my own eyes and ears.

Had the most fun time directing a show with @muse a few weeks ago and really looking forward to working with the same team for a @theblackkeys show on Tuesday! (...Yes @ashleyjpark I'm working on the lighting plot. It'll get done. I know I know.) #tbt #muse