Being a photographer for iHeartRadio, I have the opportunity to meet a lot of celebrities, and as a result, my inner fangirl has gotten somewhat desensitized over the years. Still, when John Legend showed up to promote his album Love in the Future, all that desensitization went flying right out the window.

Anyone who works with me knows that I am from the O-H, and at any given time will "casually" namedrop all of my favorite celeb Ohioans—somewhere between Halle Berry and seven presidents, I proudly claim John Legend.

Even though I can sing along to pretty much all of his songs and am a huge fan of his music, being a gushing photographer isn’t always a good look, so I tried to play it cool when John arrived at the iHeartRadio offices. He was really patient as I set up his photo shoot, which is appreciated because there are usually a lot of moving parts behind the scenes at iHeartRadio. With all the radio station interviews, music programmer meetings and digital vignettes, we are pretty much always on a tight schedule. Despite the time crunch, John was relaxed, and everyone he interacted with (including me!) was pleasantly surprised by his wit and charm.

With the hurry-up-and-wait nature of the job, we don’t always have a lot of time to chat during shoots, but somehow John and I found a few spare minutes to shoot the breeze. It turned out that not only were we both proud Ohioans, but his freshman roommate at University of Pennsylvania was actually from my city! It was refreshing to be able to remove ourselves from the workflow (even if it was only for a moment) and connect as the normal Midwest-loving human beings that we both are.

Like his music, John Legend was calm, cool and collected in every sense of the phrase. He has this kind and confident demeanor that is as obvious onstage as it was in front of the camera—and that coolness comes across in his portrait. 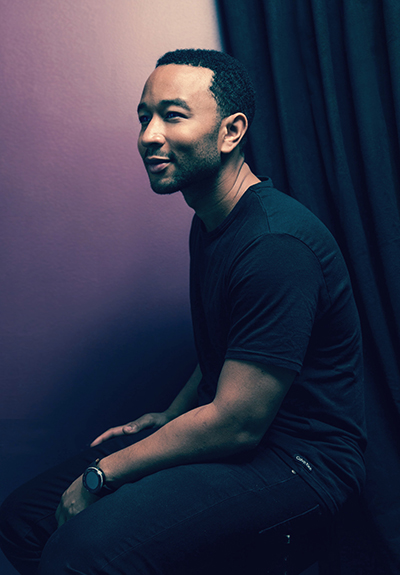 Photo by: Katherine Tyler
I never expect artists to remember me, even after multiple visits, because I imagine they’ve interacted with thousands of people in the industry since I’ve seen them last. So when John came back to NYC for his iHeartRadio theatre show two months after we met, I didn't expect him to remember me, his fellow Ohioan...but he did! Never underestimate the bonding power of Midwest pride!  #GoBucks
​
Tags:
john legend