This week, we’re joined by comedy writer, producer and host mastermind, Carolina Barlow. She works with the one-and-only comedy legend Will Ferrell as co-host of The Ron Burgundy Podcast, where she plays a quieter version of herself as a foil to Ron Burgundy. Carolina is also the co-host of the True Romance podcast, in which she and best friend Devin Leary talk about the trials and tribulations of modern love.

Read on to learn what Carolina loves about podcasts, her advice for keeping inspired and how you should wait “until you’re ready” to start chasing your dreams! 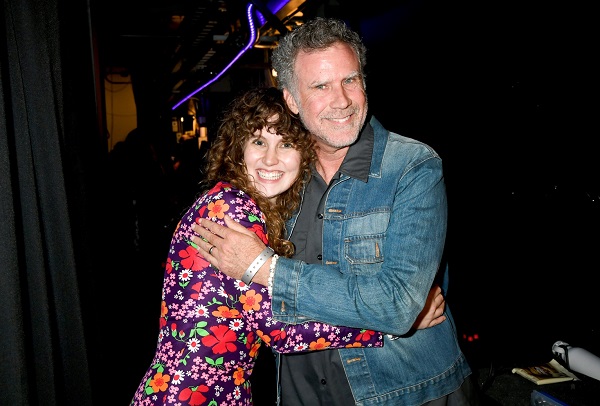 What drew you to podcasting and how did you become hosts?

It was something Will Ferrell and I began talking about when he launched The Ron Burgundy Podcast. He wanted a foil and so we created this persona of Ron’s assistant Carolina, a liberal arts student who was “woke” and always perturbed by Ron’s political incorrectness. It’s a joy to play an incredibly heightened and satirized version of myself.

What immediately drew me to the medium was the freedom. No budget restraints-just a microphone and unlimited imagination. So when we wanted to do an episode where we were stuck in an elevator, and Ron was defecating in the corner, we could record that no problem.

Conal Byrne and the crew at iHeart also drew me to the medium just by being so supportive. Kind, hard-working but with a freakish sense of calm and collected as he handled this massive and all-encompassing position. Conal is highly aware that we’re here for the listeners, and to have a good time.

I think the variety of conversations they allow. You can listen in on conversations that can vary in tone from week to week, or you can find a specific show that you turn to whenever you need to be uplifted by comedy.

Especially during this period of isolation, they’ve been a saving grace. I don’t have to mindlessly be staring at one of my screens. I can listen in to a show that requires my full attention while I’m in my car or cleaning my house.

My current podcast True Romance, which I host with Devin Leary, was a little bit of a bait and switch. We initially pitched it as a show about two crazy girls who had finally settled down into happy relationships and had a lot to say about the trials of looking for love.

But a week before we recorded the first episode-my boyfriend broke up with me and it was the start of the pandemic.

So then it led us to the question: what now? And instead of pouting, we decided to dig into the comedy of the experience.

Go. For. It. Don’t wait till you’re “ready”. Don’t wait for self-confidence or till you feel “funny”. I’m lucky enough to know a lot of people who are extremely successful in comedy and all of them have at one time had self-doubts.

Find something you love to talk about, and don’t question it.

The confidence follows the action. Record a podcast from your computer. Fail. Do it again, fail better.

What inspires you both, and do you have any Monday tips to help kick off each week the right way?

As annoying as this sounds, I like to meditate. Sometimes for no more than 3 minutes. But it’s supposed to do wonders for your brain, so.

The podcast Las Culturistas inspires me. They’re so smart, highbrow, lowbrow, kind, empathetic, CULTURED and most of all hilarious. I listen and imagine we’re friends.

Call people you love even when you’re not in the mood. It’s important to remind yourself of your community right now.

Whether you’re looking for hosting advice or tips to stay motivated, check back next week for more featured hosts and make “Creator Mondays” a new Monday ritual. And don’t forget to check out Carolina’s shows True Romance and The Ron Burgundy Podcast for some lightheartedness and laughs!