Crank up our March Employee of the Month Playlist if you’re ready to rock out for the final weeks of Winter! Our March playlist, courtesy of Theresa Jontz, Director of Business Operations & Partnerships for iHeartMedia, is sure to get you mellowed out while listening to these lyrically charged favorites. Check out the songs that inspired her in the playlist below, complete with some alternative, dream pop and indie rock tracks as well! 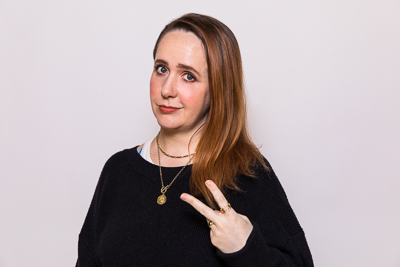 When do you listen to this playlist the most?

Since this is my current Winter 2019 playlist, I listen to it all the time, but especially at work and NEVER on shuffle. I’m big on making sure the flow of songs makes sense. I’ll start making a new one next month and leave this one as an archive to review old songs when I want some nostalgia for this time period. Ask me for my Spring 2019 playlist when I start it in April.

I studied classical music most of my life and used to be a music teacher before coming to iHeart. Because of this, I have always been fascinated with Mozart. He was such a rock star in his era and basically wrote hooky pop music in a time that didn’t have radio or streaming. People knew his melodies and his songs because everyone went to see his operas like they were popular movies or concerts like today. Plus, he was such a crazy insane genius, so hanging out with him would probably equal a fun time.

Every music lover has a moment where your brain changes because of a song or a moment in a song. I vividly remember two of these moments. The first was when I heard the drums kick into the guitar riff then build into the drums in “Cherub Rock” by The Smashing Pumpkins and then everything kicks in with this wall of sounds that made my stomach drop. It still makes me feel the same way to this day.

The second one was hearing the full OK Computer album by Radiohead straight through for the first time. I just sat on the floor of my bedroom in awe. The guts they had to release the first single as a six and a half minute abnormally structured song! The entire album felt like a full thought which made me think about music in a completely different way, even to this day.

I love being around fellow music obsessed coworkers. My coworkers have great taste and we all share new music, old music and speak the same language of being fans and needing music around us at all times.

I have a tattoo of a mixtape because I started making mixtapes on cassette when I was six years old. That year, I remember my friend Jeffrey said he liked the band Bangles and he also liked rap, so I made him a tape that had other Bangles songs, some of The Go-Gos and some Madonna and then added DJ Jazzy Jeff and the Fresh Prince and Beastie Boys. At that time, I was going to the public library and just dubbing all the albums I could get my hands on. There are still boxes of mixtapes and mix-CDs at my parents’ house going back 30 years. I haven’t stopped making mixes ever since.